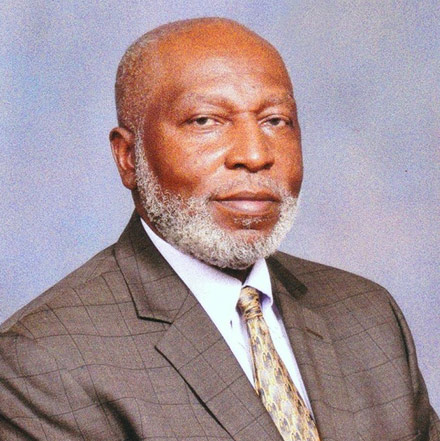 Moderator Ashley B. Vaughn, the son of Lula Vaughn and the late Lawrence Vaughn, Jr., was born and reared in Sumter, South Carolina. He attended the public schools of Sumter School District 17 and graduated from Sumter High School in 1977. Upon graduation from high school, he entered South Carolina State College and matriculated with a B. S. degree in Civil Engineering Technology in 1981.

After receiving the call into the gospel ministry, Moderator Vaughn realized that he should study to show himself approved. As a result, he enrolled into the Christian Life School of Theology in Columbus, Georgia. He has received several degrees from this prestigious school which includes Bachelor of Divinity, Master of Theology, Master of Divinity, and Doctor of Ministry. Moreover, Moderator Vaughn realizes that we can never learn too much. Therefore, he avails himself to the teaching of God's Word by enrolling in biblical courses whenever the opportunity presents itself and attending classes offered by the Congress of Christian Education on the state, as well as, associational level.

Moderator Vaughn is employed with the South Carolina Department of Transportation in Orangeburg, SC. In addition, he is the owner of Vaughn's Cleaning Service.

Moderator Vaughn is active in the community and holds membership in several organizations. His services include, but not limited to, The Sumter Baptist Missionary & Educational Association serving as moderator, chairperson of the Pastor's Search Committee Guidelines, and past chairperson of the Ordination Committee, and The Sumter Concerned Clergy of Sumter. Moreover, Moderator Vaughn is a life member of Kappa Alpha Psi Fraternity and served as the first polemarch of the Bishopville, Manning, Shaw Air Force Base Alumni Chapter. He is also a member of Mt. Zion Missionary Baptist Church in Sumter, SC.

Moderator Vaughn served as the under-shepherd at Elizabeth Baptist Church in Manning, SC from 2002- 2013. Led by God to step out on faith and begin a new ministry, he now serves as the effective and efficient pastor of Amazing Grace Missionary Baptist Church in Sumter, South Carolina and has done so since its inception in June of 2013.

Moderator Vaughn is married to the former Carolyn Green and is the proud father of five loving and adorable children: Janet, Lee, Nicole, Demetrius, and Brandon.

It is Moderator Vaughn's desire to faithfully do God's will and to give Him all honor, glory, and praise! To God be the glory for the great things He has done, is doing, and will continue to do!